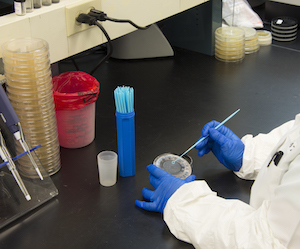 Time saved is money earned for any business, and the pharmaceutical industry is no exception. Opportunities to accelerate microbial quality control testing should be of the utmost importance to manufacturers. Beyond just speeding the process, finding ways to minimize or eliminate investigations as a result of data capture errors or incubation transfer errors in the microbiology lab can avoid other delays and costs in the manufacturing process. By accelerating the quality control process in the lab, pharmaceutical manufacturers are equipped to cost-effectively boost production or introduce new production lines with additional lab resources.

Here are five of the best ways to reduce the time spent testing samples while increasing efficiency in the microbiology lab.

If efficiency is the goal, automation is one of the best ways to achieve it. From colony enumeration to serial incubation transfers, many of the tasks associated the compendial testing method are repetitive and time-consuming. In addition, the manual activities associated with traditional testing open themselves to potential errors that can cause out-of-specification (OOS) investigations that could have been avoided. These investigations themselves are costly, and those costs can add up in the course of a year. Ultimately, automation of colony counting reduces the amount of manual work that microbiologists will have to perform, leaving time for other, more valuable activities.

With an automated, growth-based rapid microbiological method (RMM) such as the Growth DirectTM System, highly skilled microbiologists can focus on only reviewing samples that are out of specification. The technology also allows for comparable results in about half the time of the traditional method.

Beyond the need to incubate and enumerate colonies, the microbiologist is tasked to ensure accurate entry of the results, typically via keying of data into a laboratory information management system (LIMS). Given the number of samples per day that many QC labs must record, this can be a time-consuming process with the chance for a simple keying error to generate a costly investigation. LIMS-integrated, automated RMM offers the ability to eliminate the keying task altogether by immediately providing final results to LIMS, so that the stakeholders who need them have nearly immediate access to them.

Aside from accelerating the individual tasks involved in the microbial testing process, microbiologists can also better support manufacturing and any increases in production lines that will require microbial testing.  In the traditional test method, an increase in the number of tests required means an increase in the resources to perform the testing.  An automated system can support these increases far more efficiently. With built-in incubators and robotics to support high levels of sampling, the Growth DirectTM System offers the kind of throughput needed to quickly respond to any increase in testing.

As mentioned above, automation can help decreasing the amount of investigations and saving QC time and resources.  In addition, the ability to react to an out of specification sample can help the lab prepare for an investigation sooner. Traditional tests typically are read at the end of the assay, meaning an investigation will not start until then. Because automated, growth-based RMMs such as the Growth DirectTM System are regularly enumerating samples and have the ability to email when a sample is out of specification, the lab can know immediately of the event and implement targeted procedures for investigation, cleaning and containment if necessary.

Finally, one of the best ways to accelerate the quality control process is to use an RMM, which can enumerate colonies and achieve final results faster than the traditional method. Compared to the compendial method, the Growth DirectTM System achieves results in about half the time while preserving growing colonies. This is possible through of the system's advanced imaging technology, which detects microcolonies of as few as around 100 cells.  The technology starts to see growing colonies within hours, and provides comparable results in about half the time.  Because the test is non-destructive, colonies can be taken to a system for identification immediately.

To learn how other companies have already benefited from automated, growth-based RMM, check out our free set of case studies, “Practical Applications for Automated Rapid Methods in Pharmaceutical Quality Control.”

Join the thousands of professionals who regularly receive valuable news & updates on the latest trends.