Below is another example of the type of feasiblity studies our technical services team performs on unique samples.  In this case the sample is a gel cap, which can be difficult to test for bioburden using membrane filtration. A pdf version of this application note is also located in the Rapid Library

Raw materials bioburden testing involves the analysis of a wide variety of substances, many of them composed of solid matrices. A first step in the analysis of a solid matrix is often to dissolve or suspend the material in a liquid buffer to release associated microbial contaminants for testing using membrane filtration or other method. However, such materials in suspension may leave a residue on a membrane surface that may interfere with growth and enumeration of growing colonies. To successfully test these samples, the material once solubilized or suspended must be filterable within a reasonable period of time; and it cannot interfere with the development or visualization and enumeration of growing microbial colonies.

The Growth Direct System for automated rapid microbial enumeration addresses all the QC applications required inclusive of raw material bioburden testing. Sample preparation is the same as with compendial membrane filtration methods, and like the compendia it uses growth-based detection to enumerate sample contaminants, unlike many other rapid testing platforms. The growth Direct fully automates incubation, sample handling, analysis, and results reporting; only sample preparation is performed by the user. Finally, it is a non-destructive test; this attribute allows subsequent microbial ID, a necessity for root cause investigation and contamination prevention.

To determine if such unique solid matrix products could be effectively tested by the Growth Direct System, empty and dosed drug gelatin capsules of various formulations were tested. Samples of empty, and filled differently colored gel capsules were prepared as dissolved suspensions in buffer, filtered and analyzed on the system. Test organisms were spiked into the preparations to ascertain the accuracy the system in detecting contaminants, and the time savings over a standard raw material bioburden test determined.

For each capsule sample, preparation of the suspension consisted of the mixing two grams of empty gel capsules into 40 ml of TSB followed by shaking at 42°C for 10 mins to form a 5% suspension. Two ml of each 5% capsule-TSB solution was spiked into 18 ml of PBS along with the test organism S. aureus, filtered through a Growth Direct™ filtration device, and subsequently rinsed with 100 ml PBS. Filtration and rinse of each sample using PBS allows for proper dispersion of the sample and organisms across the membrane filter surface. Two ml of TSB in 18 ml of PBS spiked with S. aureus organism was run as a titer control. After filtration, the membrane filters were transferred to a TSA Growth Cassette and analyzed on the Growth Direct™ System

Filterability of the suspended capsule samples was compared to the control samples consisting of PBS only with spiked S. aureus. PBS alone filters within no more than 20 seconds in the Growth Direct™ filtration funnel. The capsule suspensions spiked into PBS also could be filtered in the same time-frame of no more than 20 seconds. 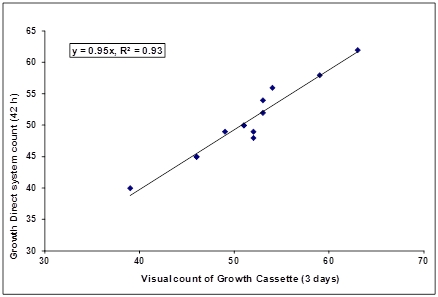 This study demonstrates that the Growth Direct™ method can be used to test for microbial contaminants in an unusual matrix composed of dissolved empty and filled capsule suspensions, and substantiates that microbes in these suspensions can be rapidly and accurately enumerated. Equivalent numbers of colonies were detected by the Growth Direct™ in 42 hours as were counted via the culture method after 72 hrs: a nearly 50% time savings. Such time savings can speed time to release of materials for production thus reducing costs, while at the same time retaining test accuracy.