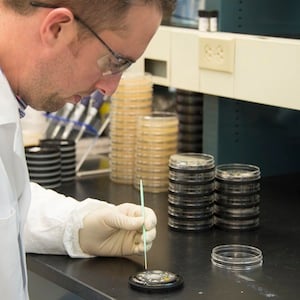 In a previous post, we discussed the general process for validation of the Growth Direct™ System. No matter the application, Growth Direct™ System users must complete installation and operational qualifications (IOQ), performance qualifications (PQ) and method suitability testing. Overall, these validation processes ensure the system's components are working correctly and the machine's imaging technology is producing reliable results with a given set of contaminants and finished products.

While the Growth Direct™ System process for environmental monitoring does involve media defined in the US Pharmacopeia, it requires a membrane – rather than an agar plate – be used to capture organisms from surfaces and air. Manufacturers will therefore need to demonstrate equivalence in colony growth between this membrane and the traditional naked agar. The following steps are necessary during EM validation:

Sterility testing with the Growth Direct™ System involves capturing organisms on membranes as described in the Pharmacopeia, but the growth media is a broth with a different formulation. Also, the membrane is placed on top of this broth, rather than submerged.

There is more than one way to validate the performance of this membrane-broth combination, and the method will depend on whether a manufacturer will be using a qualitative Presence Absence test or a quantitative Enumeration test for sterility. To validate a qualitative testing method, specificity, limits of detection and equivalence are required, and the exact parameters are effectively the same as those found in USP<71>.

Validation of a quantitative sterility test requires all of these components, as well as accuracy, precision, linearity and range. Exact validation procedures vary from one company to the next, but they will typically require sample sizes of microorganisms to be grown in parallel within the new and traditional media.

Still have questions regarding the Growth Direct System? Contact us today.

Automation Is More Than a Trend. It’s How the Global Pharmaceutical Industry Future-Proofs Operations