Optimizing Your EM Testing on the Path to Pharma 4.0™

When it comes to effective environmental monitoring (EM) testing, two of the most important aspects to consider are incubation strategy and media choice, to ensure the most robust detection of microorganisms. As Pharma 4.0™ continues to advocate the need for the integration of rapid and automated methods, the importance in implementing the right media, incubation strategy, and automation technology, such as the Growth Direct® System and RMBNucleus™ Mold Alarm-Software, becomes more evident. Testing natural bioburden recoveries from noncontrolled areas are important when determining an incubation strategy. Making assessments to optimal incubation temperature range and time, in combination with media selection to enhance and accelerate healthy microorganism growth, are critical components for performing valid and accurate EM testing processes.

Rapid Micro Biosystems® has continued to evaluate incubation schemes and media selection while developing a new licensed software feature for the Growth Direct® System, RMBNucleus™ Mold Alarm. RMBNucleus™ Mold Alarm is a feature enhancement for EM testing that provides qualitative differentiation of molds from other microorganisms. The base-line performance of this feature was evaluated with co-cultures in a 3:1 ratio of S. aureus and each species of 16 common EM mold contaminants, on two types of culture media (TSA LP80 and TSA LP80HT), at three temperature settings; 22°C, 28°C, and 32°C.

Verification of optimal recovery and rapid performance using Growth Direct® System cassettes were confirmed using both TSA LP80 and TSA LP80HT media and the optimal temperature range was expanded from 25 - 30°C to 22 - 28°C. Additionally, within that temperature range, 15 of the molds evaluated had ≥ 95% detection and differentiation, regardless of the media used, in as little as a day (Figure 1). 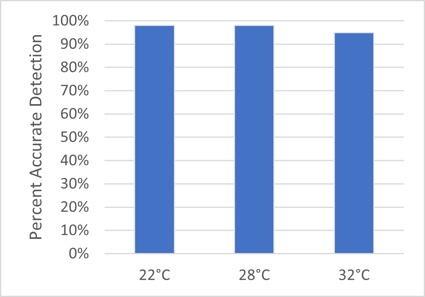 We have verified rapid and robust performance of single temperature incubation schemes with Growth Direct® System cassettes using TSA LP80 and TSA LP80HT. In addition, with the introduction of RMBNucleus™ Mold Alarm, users gain the ability to rapidly differentiate molds from other microorganisms – in up to half the time of the traditional compendial method – reducing dependence on manual-subjective methods and moving one step closer to achieving Pharma 4.0™. To learn more about achieving rapid mold detection in as little as one day, watch the RMBNucleus™ Mold Alarm video tutorial.